SANTA CLARA, Calif., Nov. 12, 2020 /PRNewswire/ — Iwatani Corporation of America, a wholly owned subsidiary of Iwatani Corporation (Tokyo Stock Exchange: 8088) and Toyota Motor North America (NYSE: TM) jointly announced today that Toyota will support Iwatani’s plans to significantly expand the number of open retail hydrogen fueling stations by nearly 25 percent in Southern California and represents an increase of 6,300 kilograms per day of hydrogen fuel dispensing capacity. Construction of the new stations is anticipated to commence in early 2021 followed by commissioning of the first stations by midyear. All seven stations will be open to the public, providing hydrogen fuel to consumers in support of the rapidly growing demand for zero-emission fuel cell electric vehicles (FCEVs). 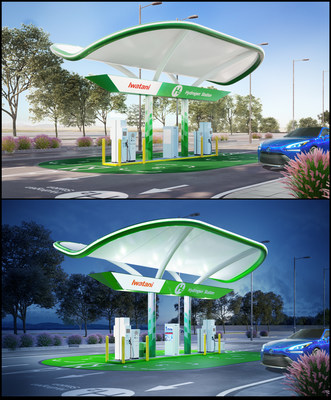 The seven new retail stations will deploy the latest H2Station™ hydrogen fuel dispensing technology provided by Nel Hydrogen. Each station will have two fueling positions and each will be capable of supplying up to 900 kilograms of hydrogen per day.

This expansion is Iwatani’s largest to date single investment in California and will bring the company’s total global hydrogen refueling station network to 64.

Joseph S. Cappello, CEO of Iwatani Corporation of America, commented, “Iwatani is truly privileged to collaborate with Toyota and Nel Hydrogen, two leaders in the Hydrogen Society, to bring world-class, hydrogen re-fueling technology to the California mobility market. The seven new stations in California are the latest demonstration of Iwatani’s commitment to investing in California’s light and heavy-duty hydrogen infrastructure and to create new jobs in the state.”

“Expanding the refueling station infrastructure in California is evidence of the growing demand for zero emission vehicles, we look forward to supporting Iwatani America in this next phase,” said Doug Murtha, Toyota Motor North America’s group vice president of corporate strategy and planning. “Our second generation and all-new 2021 Toyota Mirai will be arriving at dealers later this year, so it’s the perfect time to grow the hydrogen fueling network.”

Ulrik Torp Svendsen, Key Account Manager, Nel Hydrogen commented, “From Nel we are very honored that Iwatani and Toyota have selected our H2Station™ hydrogen fueling station solutions for strengthening the hydrogen infrastructure in Southern California. The stations will serve existing as well as new fuel cell electric vehicles, such as the next generation Toyota Mirai, with zero-emission fuel, at the same convenience as conventional fuels. With our Nel Inc. entity currently based in the San Francisco area we now look forward to expanding our business in California and supporting Iwatani.”

About Iwatani Corporation’s Commitment to Hydrogen

Since 1941, Iwatani has regarded hydrogen as the ultimate clean energy source and has consistently engaged in initiatives to encourage its widespread use. Under the corporate slogan “A world where all enjoy true comfort – this is Iwatani’s desire,” Iwatani strives to solve environmental concerns with the aim of achieving a carbon- free society through the use of hydrogen.

Iwatani is Japan’s only fully integrated supplier of hydrogen and presently supplies its base of light and heavy-duty hydrogen refueling stations and industrial customers via five liquid and ten gaseous hydrogen production plants throughout the country. In addition, Iwatani is a steering member of the Hydrogen Council, a global initiative of leading energy, transport and industry companies, with a united vision and long-term ambitions for hydrogen to foster the energy transition. Iwatani is developing hydrogen refueling stations with the aim of stimulating new hydrogen demand and supporting the widespread distribution of FCEVs.

Relevant initiatives are being promoted in cooperation with Japan H2 Mobility, which was jointly established by infrastructure operators, automakers, financial investors and other stakeholders as the driving force for developing hydrogen refueling stations. Iwatani participates in initiatives involving carbon-free hydrogen, including a demonstration project for the production, transportation and storage of large quantities of liquid hydrogen in Australia, and the Fukushima Plan for a New Energy Society—one of the world’s largest hydrogen production projects, using renewable energy with zero CO2 emissions. In addition, Iwatani is an executive member of the California Fuel Cell Partnership and a member of the California Hydrogen Business Council and the Hydrogen Safety Council of the American Institute of Chemical Engineers.

Toyota (NYSE:TM) has been a part of the cultural fabric in the U.S. and North America for more than 60 years, and is committed to advancing sustainable, next-generation mobility through our Toyota and Lexus brands. During that time, Toyota has created a tremendous value chain as our teams have contributed to world-class design, engineering, and assembly of more than 40 million cars and trucks in North America, where we have 14 manufacturing plants, 15 including our joint venture in Alabama (10 in the U.S.), and directly employ more than 47,000 people (over 36,000 in the U.S.). Our 1,800 North American dealerships (nearly 1,500 in the U.S.) sold nearly 2.8 million cars and trucks (nearly 2.4 million in the U.S.) in 2019.

Nel ASA (OSE:NEL)  is a global, dedicated hydrogen company, delivering optimal solutions to produce, store and distribute hydrogen from renewable energy. We serve industries, energy and gas companies with leading hydrogen technology. Since its foundation in 1927, Nel has a proud history of development and continual improvement of hydrogen plants. Our hydrogen solutions cover the entire value chain from hydrogen production technologies to manufacturing of hydrogen fueling stations, providing all fuel cell electric vehicles with the same fast fueling and long range as conventional vehicles today.